two to the four to the one to the three 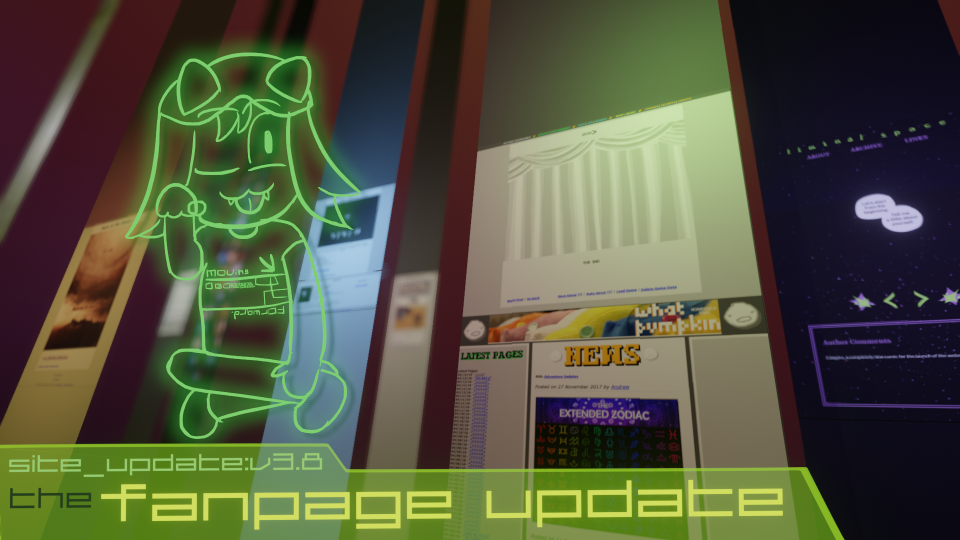 As per the standard around here, I managed to break the promise I laid out in my last post. There is a very good reason for this, and that is mostly (probably) ADHD, but that’s a topic for another time. We’re not here to talk about that, we’re here to talk about new stuff! That’s right folks, without any further delay, I am FINALLY ready to release the next big update to this darn ol’ website nobody cares about: The Fanpage Update!

Let me talk about two big pages that I’ve added to the site this update:

First up, the Fanpages page. There’s a bigger description of what it is if you go to the page itself, but to keep things short: it’s basically a collection of mini-websites that are dedicated to properties of pop & Internet culture I really like. (Across the Juniverse is a good example of this!)

Second up: Thanks to previously-mentioned page, I’m glad to tell you that this update brings another page to the Spriteclad repetoire, and ooh boy is it a big one. I’m finally proud to introduce something I’ve been wanting to make for a while now: Spriteclad’s Sburbanthology!!

That’s right, it’s a complete webpage dedicated to everyone’s favorite and simultaneously least favorite webcomic, Homestuck! And the best part is, it’s in Early Access!! There’s a decent enough reason for that, though: right now, as it is, the webpage is all about promoting Homestuck fan content made by Homestuck fans, for Homestuck fans. So right now it has a pretty niche appeal as far as site-goers are concerned. But, I’m eventually planning on turning it into a full-on guide for people who have never heard of HS before that want to read it. And, yes, to those of you who were wondering: Homestuck is so long and so obtuse that I feel it deserves at least some of a guide for new readers.

If you’re a Homestuck fan, I highly recommend you check out that page. I spent a good amount of time on it and I learned a teeny bit about CSS along the way. (It’s not mobile-ready yet, though, sorry!) If you’re curious about all the other small changes I made throughout the past few months, you can check the Changelogs page. Thanks for keeping up with my bullshit for all these months I’ve done nothing with the site. It’s just hard to be motivated to do things, and I really hope to get some help in that regard later this year.

Have a good day and don’t forget to wear a mask,

(P.S. Next big site update is gonna be me adding things to the site such as an RSS news feed, and finally getting around to redesigning the header/splash page. Look for it sometime early next year!)

I’m just going to make this quick: the next big update will be hopefully coming by the end of August. It’s actually close to being finished, but I have a couple big things that I need to finish first. The update is going to add not one, but two new links to the main navbar, so that should give you an indication of how big it is. (And yes, if you’re wondering, this is the update I mentioned aaaall the way back in January.)

But yeah, one day I’ll update the site more than once every three months. I have a slight feeling my brain is broken, but that’s beside the point.

I’ll see you all when I finish this update, hopefully sooner rather than later.

Don’t have much to update with, other than me not doing an April Fool’s joke this year for obvious reasons (them being that a) there’s a pandemic outside right now, and b) I didn’t have any ideas and I forgot the date was coming up). I’m not really any closer to getting those sections done (because… other reasons), BUT I did update` the site’s mobile CSS a bit to make the whole thing even easier to navigate on mobile. Hopefully it works well enough. Let me know if it doesn’t! (I really need to get that contact page up and running one of these days…)

But yeah, other than that, not much to say right now. I am moving to the middle of nowhere (aka my relatives’ rural forest property) for a couple of months while I’m in-between housing, so… uh. There’s that. (I better still have internet access up there or I’ll be mad.) But site-wise? Not much right now. Sorry about that. Hopefully the next time I update will be before August, unlike last year.

Hello there, and happy (very belated) New Year, everybody!

God, I still can’t believe it’s actually 2020. I would comment about my lack of updates but I feel I’ve done that every time I’ve updated at this point, so I’ll save it. I’m hopefully going to be slightly more active on the Internet (at least publicly) this year, so with it will hopefully come more blog posts than last year. Long story short, I’ve been kind of afraid to update for stupid nonsensical mental health reasons, so I’m going to prove it wrong by hopefully not forgetting about this site for six months. No promises, but here’s hoping!!

Anyways, the usual stuff aside, I want to talk about something cool some friends of mine set up. I have a friendserver on Discord (as most kids do, I’m assuming), and my friend Viz thought it would be a good idea to make a webspace for me and my friends, so that we don’t have to rely on certain free webhosts to host our stuff for us. It ended up working out rather well thus far, and you can find the current spoils of that project over here! I haven’t set anything up on it yet (I am perfectly fine with my VPS, thanks), but I’m still glad it exists and I want to give a huge thanks to Viz for setting up the grunt of it all. It’s even got a Gopher service in it too, which is Extremely Neat!! You can check it out with the link above, and I’ve slammed an 88x31 for it in the footer as well. (I’ve also put some other new buttons down there…)

Other than that, I don’t have much to comment about the site at large… other than I’m planning on adding a completely new section to the site within the next few months. Again, no promises, but I’m hoping to get that done by the end of summer, at least. Pray that my motivation strikes me for long enough so I can finish it up in time.

Oh yeah, and I just realized I never updated the site one last time in 2019 like I said I would in my last post. Sorry folks, but the last couple months of my life have been hectic (for life reasons) and I kind of forgot about the site in the process. I hope you all can forgive me as we trudge into the new decade with our hopes high and expectations low! I’ll see you in a month or two, hopefully!!

Have a good February,

Heyyyy! Hi. It’s been a while since I updated the si– wait I’ve said that at least four times already. Oops. But yeah, I’ve been busy with work and anxiety and that’s why I haven’t gotten much done in the past few months. But I’m back now, with a few minor updates to the site.

First: this really isn’t something you’ll notice as a user, but this is by far and away the biggest change to the site this update. Basically, I went through the semi-laborious process of converting all the links in the directory from raw HTML to a format called YAML, which basically means I can just plug in directory items into a data file and it’ll just populate on the page. This is way better than me having to copy and paste the same block of HTML over and over while changing the name/URL/description every time. Hooray for SSGs!!

Second: Not only have I added a few more pages to the Directory, BUT I’ve also given the Good Webcomics page a fresh coat of paint!! I’ve added thumbnails for /every/ comic and labels signifying when a comic has finished or been cancelled. I plan on giving almost every other page in the Directory the same treatment, but it might be a while before that happens considering how many images I have to add for each game/application/et cetera.

Third: I decided it would probably be better for my brain if I didn’t keep every single HTML file in the same directory, so I decided to move most sections of the site to their own folders (e.g. /directory/, /articles/, etc). I’ve set up server-side redirects to make old bookmarks of those pages redirect to the new ones, but there’s a tiny chance I might have missed an unchanged link to one of the old, now nonexistant pages. If you find a dead link (or image) somewhere, let me know on Twitter.

But yeah, that’s pretty much this update in a nutshell. Sorry for the sporadic updates, I’ve just been bouncing back and forth between hyperfixations like mad (as I always do) and so I keep forgetting to pay attention to the site. I’ll try to update at least one more time before the end of the year.